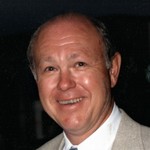 Mr. Gross was a graduate of Syracuse University where he majored in accounting and was a member of Phi Delta Theta fraternity.

He served on active duty with the U.S. Air Force in Buffalo where he was an Auditing Officer, auditing contracts at Chevrolet Aviation Engine, Bell Aircraft and Curtis Wright. He also served as a reserve officer for six years and was promoted to captain upon separation.

Mr. Gross was a senior account executive at Merrill Lynch where he worked for 22 years following which he changed his career path. He was Director of Planned Giving at Canisius College where he established a planned giving program after which he held the same position at Connecticut College in New London, Connecticut. He retired after eight years as a vice president and trust officer at four banks in New London.

He was ordained an elder at Westminster Church and a member of North Presbyterian Church at the time of his death. He was a member of Rotary International and belonged to clubs in New London, where he was elected president and honored as a Paul Harris fellow and Mystic, Connecticut and Williamsville, New York.

At Canterbury Woods, Roger volunteered for the Marketing Department welcoming new residents and making many friends. This is where he met Norine Sperling with whom he shared several years of special friendship.